I was so excited by the simplicity and function of this mouse, bought it for all my work and home computers and even given some to friends – it is a shame though to see it being discontinued (just bought two more to store away :-)...  I usually don’t recommend hardware to people cause nowadays it’s so easy to find all the reviews you need and people usually want to find the good stuff themselves, but I can’t resist – great, simple, easy to use mice are always underrated.

I’m talking about Microsoft Wheel Optical Mouse – great simple shape (use with either hand), no additional buttons or anything (no need to install IntelliMouse), light and easy to navigate with, long soft cord (stiffer wires usually break down where the cord enters the body after a couple of years), soft and quiet clicks with both buttons and the wheel (so handy to close those thumbnails in Windows 7 taskbar thumbnails or browser tabs with a middle click). In brief, a great, dependable, easy to use, no fuss mouse – it’s a shame to see it going away, finding it harder and harder nowadays in online stores. Well done Microsoft on this one, and goodbye old friend! 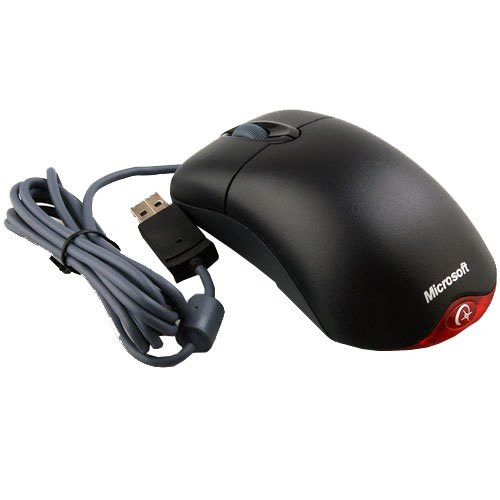 Thanks to a comment from Prof Julie on the previous post pointing to a forum thread where someone has succeeded in installing Windows 8 Developer Preview on ASUS R2H, I tried again this time not running the setup.exe from Windows 7, but from a bootable disk.

Here are the steps this time:

It took about 30 minutes to copy the files, extract and go through the configuration screens. I reused the 13 GB partition used for Windows 7, with 4.5 GB free after installation.

Logging in with the Ethernet connected after a couple of minutes I see it managed to download a wireless driver and start seeing wireless networks available – there are more updates to apply, some for Authentec fingerprint sensor and I see a wireless driver update as well… 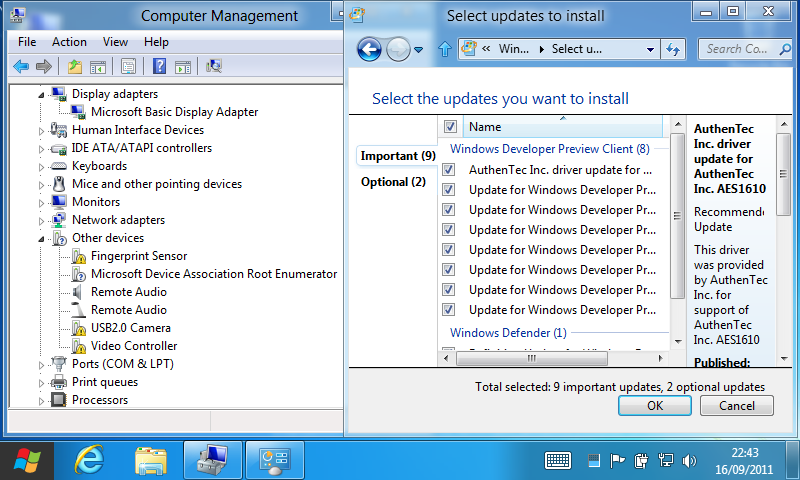 Interesting part is that it’s got Aero Peek and transparency with the default Microsoft Basic Display Adapter, something that wasn’t available in Windows 7. Responsiveness is pretty much on par with Windows 7 and out of the box the pen calibration is off (cursor shows above-right to the finger nail / stylus, something that I guess can be fixed through calibration).

Screen resolution is the physical 800x480, can’t seem to be able to get it higher than that – I won’t install the previous Vista video driver, never used the higher resolutions provided by the ASUS tools, found those too blurry to use, maybe once in a blue moon just to get around a window that was too tall (for most I used to drag the task bar to the right to get to the bottom of the window). 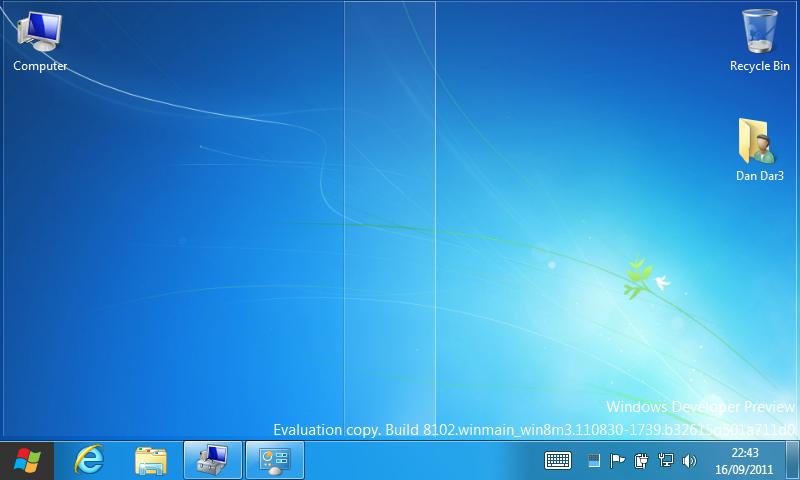 Task Manager is largely improved to show more in-depth information, where previously I had to use Process Explorer to get some of that information – should be very handy for servers (I am involved every now and then in customer performance assessments and troubleshooting – it’s nice to have the tools already on the system rather than having to download them). 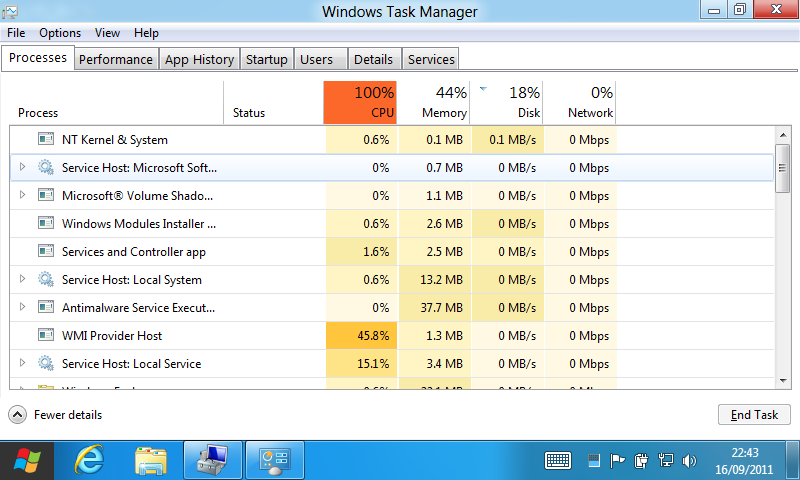 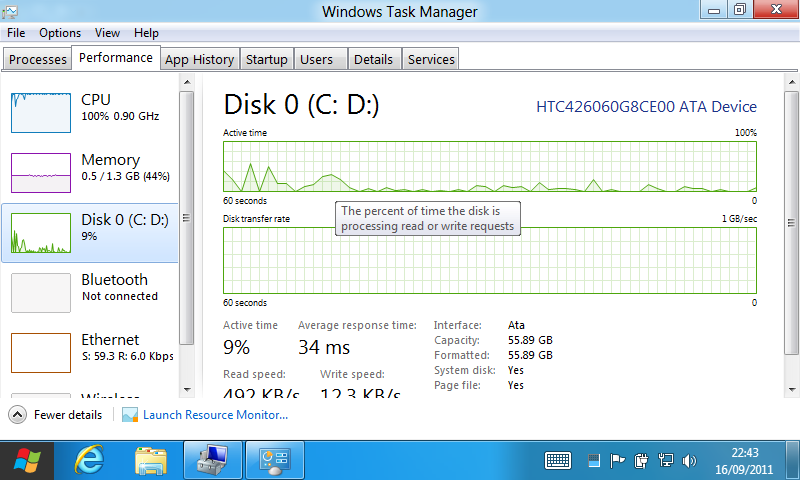 Windows Explorer got the ribbon, with the ability of collapsing it using the up arrow thingy in the top right corner… 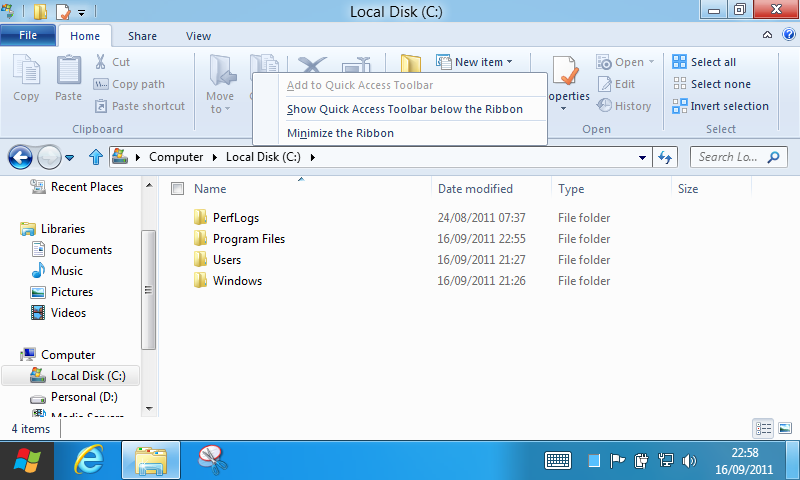 Here is a screenshot of the main start screen – have I mentioned that all the screenshots were taken from an RDP connection with full theme / transparency support from my Windows 7 laptop? 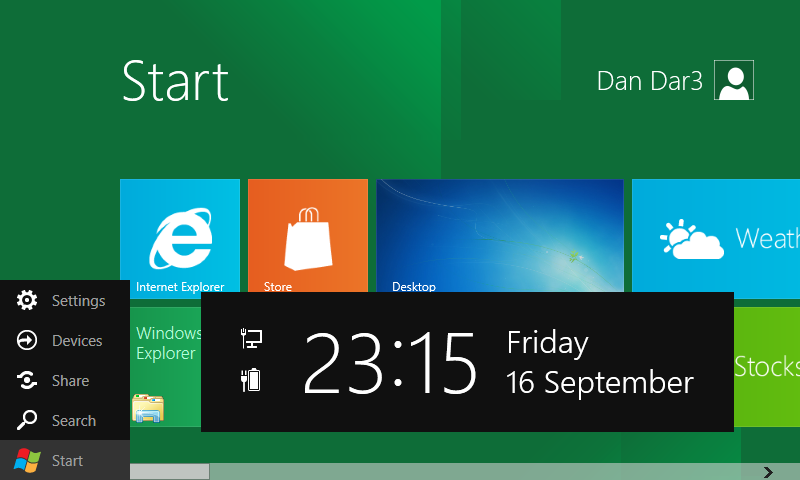 I don’t know what else to try for now, I’ll set it up for normal use and see how we get along – doesn’t seem to miss anything, we’ll see how it goes over the next few weeks. I’ll take it for a bus ride maybe next week and see how the battery fares but looks very usable to me, not missing Windows 7 already.
13 comments :
Email This BlogThis! Share to Twitter Share to Facebook
Newer Posts Older Posts Home
Subscribe to: Posts ( Atom )